The pilea glauca is one of the few plants that don’t have a confirmed botanical name. Although, it may probably end up being called Pilea libanensis. That said, what it doesn’t lack is a bunch of common names. A few of these names include pilea silver sparkle, grey baby tears and grey artillery plant just to name a few.

Like its botanical name, its origin is a little fuzzy as well. However, what botanists do know is that it is native to Central America and Brazil.

The pilea glauca is a fast growing vine with trailing foliage. It is likewise easy to care for. Both are reasons why you’ll see them in and around homes.

Like other vines, you’ll notice this plant because it grows in clusters. Its small, round, light gray leaves won’t catch anyone’s attention on their own. But as a group you’ll notice them. In a way, the plant looks much like the baby tears plant, except its leaves are paler in color. Thus, its nickname as the grey baby tears.

Because of how they grow, they are perfect a ground cover. Other ways to grow them include in a terrarium or in pots. The latter being very popular because it allows you to position them on tabletops, high shelves or the floor.

Pilea glauca do best in bright, indirect light. While they can tolerate directly sunlight, their threshold is very limited. You typically don’t want them getting more than 2 hours a day of direct sunlight. More so, keep them away from the harsh mid afternoon sun or that during the peak of summer.

Because of their specific light requirements, you’ll want to be aware of where you put the plant or its terrarium. Ideally, somewhere near an east facing window. This allows then the gentler morning sunlight. And, they’ll get about 1-2 hours of direct sun as well.

A west facing window likewise works. But, you need to be more careful. Later afternoon sun isn’t a problem. But, noon and mid afternoon can get really intense. So, if you place your terrarium near a west facing window, it is a good idea to filter the sunlight.

You can do so using a sheer curtain or some kind of translucent drapes. Similarly, if there’s a big tree with lots of leaves just outside the window blocking the sun, the dapple sunlight will work well.

In addition to giving it the proper lighting conditions, another factor to consider when situating your plant is temperature and humidity.

Here, your Pilea glauca like temps that range between 70 to 80 degrees Fahrenheit. That’s its sweet spot. That said, because it has been grown as a houseplant, it’s been able to adapt to most household temperatures which can range from about 55 degrees or 60 degrees all the way up to about 80 to 85 degrees depending on where you live and what time of the year it is.

However, giving it something similar to its native tropical conditions, which is warm to hot gives you the best results.

Similarly, its tropical origins means it enjoys humid conditions. Thus, keeping the humidity between 60% to 90% works best. Most homes are either lower or just in the low end of this range. Thus, if you need to increase the humidity around the plant here are a few things you can do.

Here are some ways to increase humidity around your pilea glauca to keep it happy.

All you need is one of these to increase humidity to make your pilea glauca happy. 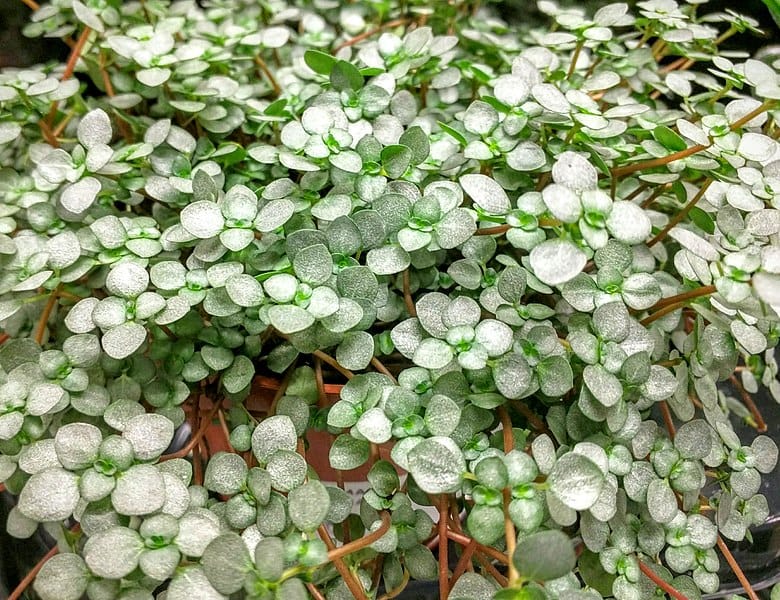 Although the pilea glauca has succulent leaves, it thrives on frequent watering. That’s because it likes a consistently moist environment. However, it is prone to root rot if you leave it sitting in water for long periods of time.

Thus, the best way to water this plant is to give it a thorough drenching then allow it to drain. Then, wait until the top 2 inches of soil has dried out before watering again. In most cases, this comes out to about once every week or two weeks.

So, you can start from there and adjust depending on how quickly or slowly the soil dries. Because of the weather, pot size, kind of soil, plant size and other factors, the rate at which your potting soil dries will vary per home.

That said, never let the soil completely dry out during the summer months. When the fall and winter come around, scale down the watering. This will reduce frequency to closer to every 3 weeks or so.

Similarly, don’t allow the soil to get soggy. By deeply watering each time then allowing the excess moisture to dry and waiting till the top 2 inches dry out, you’ll be able to avoid root rot.

In addition to frequency and amount of water, it’s worth knowing that the pilea glauca is sensitive to water quality. Thus, it’s a good idea to skip tap water which is filled with chemicals and impurities.

Alternatively, you have a few free choices.

Pilea glaucas are not overly picky about soil. As long as you give it loose, fluffy soil that’s well-draining it will be happy. A light potting mix will prevent too much water retention. Thus, avoiding the risk of letting your plant sit in water.

As such, using perlite and peat are a good combination. This allows the soil to retain some moisture for the plant to absorb while being very well draining. If you don’t like to make the mix yourself, you can likewise use an general purpose potting soil, which hasn’t cause any problems for me at all.

Additionally, using a clay or terra cotta pot helps. Both materials are porous. So, they allow moisture to seep out in very tiny amounts. This helps prevent too much water retention.

Like soil, fertilizing your pilea glauca is fairly straightforward. All it needs is an all-purposed or balanced fertilizer diluted to half or quarter strength. Apply this once a month during its growing season. When the cool seasons arrive (fall and winter), it’s time to stop feeding.

If you’re not sure whether you’re giving it enough plant food, always side on less rather than more. Too little fertilizer results is slower, a bit sluggish growth. Both you can easily fix by adding more gradually.

But, too much fertilizer can damage the roots of your plant which is much more problematic because it can kill you plant.

Additionally, fertilizer residue isn’t good for your plant. Thus, flushing them out helps prevent buildup. To do this, every time you water, do so deeply. This means watering the soil until the moisture starts dripping from the bottom holes of the pot.

Then keep letting the excess moisture drip. As it flows out, so do the reside buildup.

Pruning your pilea glauca is often done when it is grown as ground cover. Doing so lets you thin the growing trailing foliage to keep it from getting too dense or spreading out too far. In addition to limiting its size and making it look neater, trimming your plant also allows for better air circulation to all parts of the plant.

The other reason for pruning this plant is to get rid of damaged or dead leaves. This helps it continue to grow in a healthy way.

That said, you shouldn’t cut too much of your pilea glauca in one sitting. When grooming only trim as much as 20% at a time. Then leave the rest for another time.

To do so, use a sterile pair of scissors. You can disinfect your cutting tools by using rubbing alcohol and cotton. Then cut the stem at the point it attaches to the main branch.

The best (and easiest) way to propagate your pilea glauca is via stem cuttings. Because they root quickly, you don’t have to wait too long to see the fruits of your labor. When propagating via stem cuttings, you can opt to grow them in water or in soil. Both work but go through different processes.

Here’s how to propagate pilea glauca via stem cuttings.

Pick a stem that has at least 2 to 3 leaves. You want something that’s known to be prolific. This way you know it will grow.

Cut the stem. Make sure the cutting is at least 3 to 4 inches long. This gives you enough length to put in water or plant into the soil.

Now, it’s time to choose between rooting the cutting in water or soil

How to Root Pilea Glauca in Water

How to Root Pilea Glauca in Soil

Between the two, this is what I prefer doing. While you don’t get to see the roots as they grow, you also don’t need to transfer them to a pot later on because they’re already there.

Pilea Glauca are fairly fast growing vines. Therefore, what makes them easy to propagate also means that you’ll need to repot them sooner rather than later. The good news is, they don’t mind being in a tight bunch. As a result, you can repot them every couple of years.

Spring is the best time to move them because you’ll be giving them a lot of extra space and fresh new soil to begin their growing season. Additionally, its growth phase allows it to overcome the stress caused by the transplanting faster. However, it’s not necessary that you do them during this time. In fact, you can do them anytime when grown indoors.

These plants are safe for both humans and animals. Thus, you don’t have to take any special precautions if you have pets or young children in the house.

Besides growth problems, pests and diseases can be another issue with pilea glauca. This is because the live in highly humid conditions and like moisture (watering). Both characteristics make them prone to pests like scale, mealybugs and aphids as well as disease.