The Philodendron verrucosum is a beautiful foliage plant that’s known for its large heart-shaped ribbed leaves that vary in color depending on the species and hybrids you have.

It is climber. So, adding a moss pole or something it can crawl up will help it grow. As it gets bigger, it can reach up to 3 feet high with its leaves being the most dominant feature because of their size.

Another interesting thing about the plant is that it is a cold grower. As such, it prefers lower temperatures compared to other philodendrons and houseplants.

Here’s a look at the plant’s many different leaves based on their species (including hybrids): 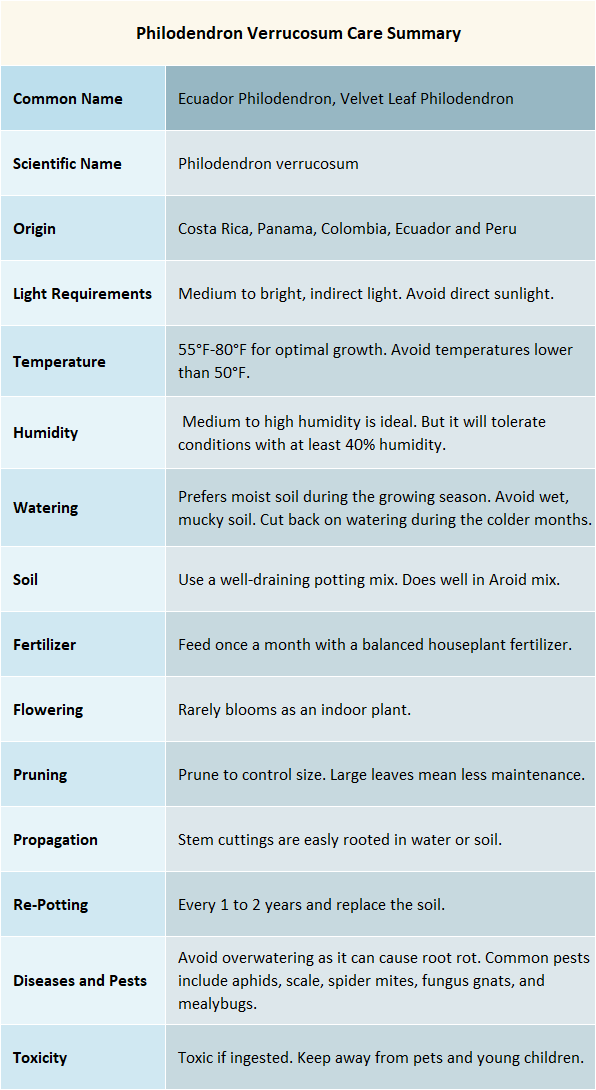 The philodendron verrucosum enjoys bright, indirect light. But, it prefers a little less light compared to what most houseplants or even other philodendrons would like.

Its natural habitat is in the understory of forests in Central and South America, namely Costa Rica, Ecuador and Nicaragua. As such, it gets a lot of sun protection from the larger plants and trees whose big leaves and branches lord the forest canopy.

This makes it receive dappled light and to a degree less light than other plants.

Just as importantly, keep it away from direct sunlight. Here are a few ways to tell if it is receiving this:

All of these are signs that your plant is in the path of the sun’s rays (direct sun). if so, move it away since long hours here will cause sunburn.

Thus, the best spot for it is in a north facing window. And east facing works too as long as you keep it from the sun’s rays. Although because the morning light is gentler, it can tolerate some of this without any issues.

You want to be careful with a western or southern exposure since both feature intense afternoon sun. The south is more dangerous because it offers the longest hours of sunlight.

If you keep the plant in either spots make sure to place it at least 3 to 6 feet from the window or filter the sunlight wit a sheer curtain or some kind of shade cover which doesn’t completely block it out.

Outdoors, your philodendron verrucosum will do best in partial sun and partial shade.

When it comes to temperature, your philodendron verrucosum prefers a slightly cooler climate compared to many tropical plants. This means keeping it in temperatures between 55 and 80 degrees is best.

The reason for this is that in the wild, the plant grows in pre-mountainous areas at medium to high elevations, between 50 to 2,000 meters above sea level. Most of which have been collected at elevations over 500 meters (1600 feet) or higher.

As you go up, the air molecules are farther apart from one another. Thus, the air is not only colder is it also thinner which is why it is harder to breathe in the mountains.

This makes the plant a cool grower. That is, it grows better and faster in moderately cool temperatures. But, do keep in mind that it is not frost hardy. So, once tempertature drops under 55 degrees, you want to bring in indoors if you keep it outside.

Allowing it to stay in the cold under 50 degrees for long periods will harm the plant.

In general, it is hardy to USDA zones 9 to 11. As such, you can grow the plant outside all year round.

Humidity is another story. And, it is its combination with the cooler temperature preference of the plant that makes caring for the philodendron verrucosum challenging.

Often higher temperature comes with higher humidity. Colder times have lower humidity. Such is the case in summer and winter.

But, your philodendron verrucosum likes very high humidity. In fact, it is perfectly happy with humidity that’s over 90%.

At the lowest, you want to shoot for 60% humidity to satisfy it. That said, higher humidity produces better growth and more vibrant colors.

So, it may be a good idea to invest in a humidifier. The reason being it is harder to maintain very high humidity with natural means, including misting, pebble trays and grouping plants.

Below 60% humidity, you will experiences problems start happening. And, the lower you go, the more issues start popping up.

In the beginning leaves will being to crisp and turn brown. Then they get worse. Philodendron verrucosum like moist but not wet or soggy soil. This mimics its natural living conditions. As such, it is important to balance the amount of water your plant gets.

Too much water puts it at risk of root rot. This is deadly for plants because once the roots are damaged, it won’t be able to absorb nutrients and water. Thus, causing it to starve and dehydrate to death.

Since the roots are hidden underground, you’ll often wait for symptoms to appear in the stem and leaves before noticing there’s a problem. By, then there’s been quite a bit of damage done.

As such, the best thing it to avoid it altogether by not overwatering the plant.

On the other hand, dry soil is likewise bad for your philodendron verrucosum. Early signs of this are wilting and sad-looking leaves. As it progresses, leaves will change color and start to drop. Ideally, you don’t want it to reach that point.

The difference between over and underwatering is that with lack of water, as long as the dehydration isn’t very serious, the plant will quickly bounce back and perk up once you hydrate it.

It is harder to come back from overwatering.

This is why controlling how much and how often you water is crucial. In addition, making sure you use proper soil is essential as well as having a container with holes at the bottom. Your philodendron verrucosum is a hemiepiphyte, That is, it spends part of its life as an epiphyte. In this case, the plant starts out living amongst trees. But, as it gets older, starts growing in the ground.

Why is this important?

As a hemiepiphyte, the plant’s roots like an airy environment. This means you want to provide it with light, loose and airy soil. Similarly, these conditions allow the roots to quickly dry after they’re wet.

As such, well-draining soil is essential. Allowing the plant to sit too long in water, which happens with heavier soils, is a no-no.

To achieve this, you want a substrate that’s able to retain enough moisture to keep the plant hydrated (and the soil moist). But, it needs to be airy and well-draining.

To do so, add perlite and orchid bark to high quality potting soil. The perlite improves drainage while the chunkiness of the orchid bark will allow it to be airy.

For optimum growth, apply a balanced fertilizer once a month. You can use one with an NPK formulation of 15-15-15 or less. If the plant get a lot of light or it is summertime, you may want to up feeding to once every two weeks. But, do so slowly since you don’t want to overfeed the plant.

Alternatively, you can use a slow release fertilizer. This disperses plant food over time. In doing so it reduces the risk of fertilizer burn.

It also means longer intervals between feedings. All you need to do is make sure you feed it 3 or more times a year.

The key with plant food is more isn’t always better. In fact, too much is way worse than not enough. So, err on the side of caution if you’re not sure. You can always increase the dose or frequency later.

But, root burn is not reversible.

That said, you’ll know if you’re not feeding your philodendron verrucosum enough. It will grow slowly and it will have fewer and smaller leaves. if this is the case, increase feeding.

Another issue can be pale leaves. This can happen to philodendrons if they don’t get enough calcium and magnesium in their fertilizer.

You won’t need to prune your philodendron verrucosum often. There are only a few reasons to do so. And, a lot of which will depend on how you prefer to shape your plant as well as how big you want to keep it.

Keep in mind that this plant is a climber. So, it tends to go up vertically as opposed to crawling on the ground.

Another reason to trim the plant is to remove dead or damaged leaves. You likewise want to take out those that become yellow or brown. Philodendron verrucosum can be propagated in a few ways. But, the most common one used is stem cutting because it is easy and produces good results.

In fact, stem cutting is a ideal for propagating philodendrons. The best time to do so is spring.

How to Propagate Philodendron Verrucosum from Stem Cuttings

Keep in mind that propagation is both art and science. As such, sometimes it takes longer to grow. Other times, shorter. Then, it can also be unsuccessful.

As such, you may want to root more than one stem cutting at a time.

You will likely need to repot your philodendron verrucosum every 1 to 2 years as it will outgrow its current container by this time. However, the time it takes can vary depending on how fast it grows.

That said, the plant does not like to be rootbound. Nor does it appreciate living in a tight pot. As such, once it begins to get this way, it is time to move.

Similarly, you don’t want to keep it in an undersized pot since its roots like a lot of room.

When it comes to pots, you have a few options. But, the one thing you want to make sure of is it has drainage holes. This allows excess moisture to drain quickly.

Choosing between plastic and clay is something you’ll need to decide.

Another option is a terrarium which would solve humidity problems. However, keep in mind that the plant can grow up to 3 feet tall. As such, you’re going to need a fairly big terrarium.

As with plants in the genus, the philodendron verrucosum is toxic. You want to keep it away from young kids, cats, dogs and other pets as they can get curious and chew on it. ingestion can cause mild to serious side effects although is rarely fatal.

Nevertheless the problems that come with it are not worth the trouble.

Pests are not a big problem for Philodendron verrucosum. But, they can happen. A few of the common attackers include spider mites, thrips, aphids, whiteflies and mealybugs.

Here, cold and wet are always conditions you want to avoid. While pests are often treatable with insecticidal soap, they’re a hassle and treatment takes weeks to eradicate them. So, avoid as much as possible.

Keeping a healthy plant makes it resistant to pest. On the other hand, a stressed plant is vulnerable.

Overwatering is can be a big problem because the plant likes humid conditions. High humidity adds moisture such that the roots and leaves can grow fungal diseases.

While leaf spot is treatable with fungicide and trimming the affected areas, it is harder for your plant to recover from root rot.

As such, be very mindful of watering.