The Alocasia Dark Star is a large plant with amazingly huge leaves. In fact, if you let it grow outdoors, the leaves can cover an entire person.

As you would guess, the plant is best known for its ovate, green leaves and black stems. This is one of the few black stemmed alocasia plants around.

How do your care for the Alocasia Dark Star? The plant will thrive in medium to bright indirect light. Avoid direct sunlight especially during mid-day and summer.

It enjoys warm climates and high humidity. While it prefers moist soil, allow the soil to dry between waterings to avoid root rot. Also use well-draining soil.

The Alocasia Dark Star enjoys medium to bright indirect light. That’s because the plant is used to something similar where it comes from.

The plant is native to the tropical rainforest of Asia. There, it lives under the canopy of the larger trees.

As such, it is used to getting dappled light.

Therefore, indirect, filtered, diffused or dappled light are ideal. On the other hand you want to be careful about direct sunlight.

With direct sunlight, morning and late afternoons are what the plant like. It prefers the former as morning light is not only gentle but also gives you many hours of light.

However, you want to be careful with mid-day direct sunlight. The times between 10:30 a.m. to 3:30 p.m. are when the sun is most intense. And the Alocasia Dark Star is not able to tolerate direct sunlight during this time.

If you leave it there, its leaves will get discolored. With more extreme exposure, they can scorch leaving you with burn marks on foliage.

On the other hand, the plant’s dark green leaves allow it to tolerate low light.

The Alocasia Dark Star enjoys temperatures between 70 to 85 degrees Fahrenheit. It actually prefers conditions on the upper part of that range.

Again, this comes from its tropical nature.

This also means that is has poor tolerance to the cold. The plant is not cold hardy and will have a hard time when temperatures drop under 60 degrees Fahrenheit.

And while it will survive colder environments, you’ll see its growth slow or stunt. Also, it can sustain cold damage, some of which are irreversible.

For this reason, you want to avoid leaving it in the cold as its appearance will look different or abnormal.

It is also why you don’t want to forget the plant outside once the cold arrives. If left outdoors through the winter, the plant will die back to the soil.

However, the rhizomes will still be okay provided that the ground or soil in the pot does not freeze over. This will allow the plant to begin growing again once the warm weather or spring arrives.

That said, you do lose the entire plant above the soil including the impressive leaves that have already grown.

Instead, the Alocasia Dark Star enjoys USDA Hardiness Zones 9 to 11. Here, the weather stays warm all year round and is consistently sunny 365 days.

The Alocasia Dark Star prefers humidity of 60% to 70%. This is its ideal range where it can grow at its best. It is also worth noting that it can tolerate 50% humidity and levels a little lower than that.

Unfortunately, the average humidity in most homes usually runs between 20% to 50%. This means that it may be a problem depending on where you live. 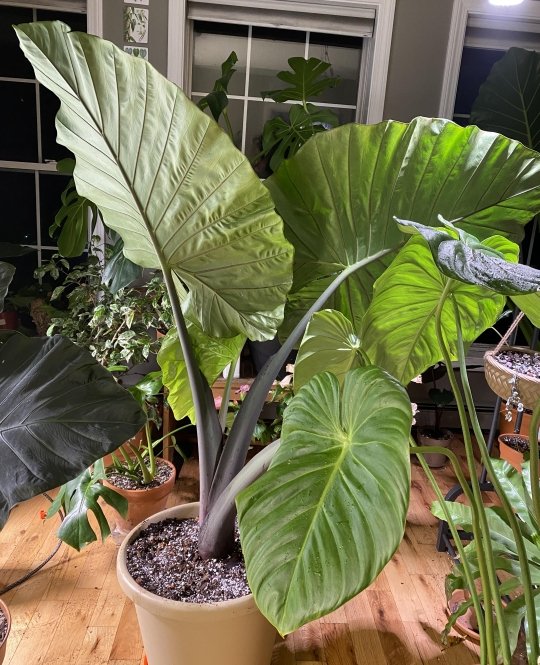 Thus, if your home has drier air than what the plant needs, it is a good idea to increase humidity around the Dark Star Alocasia.

Note that you don’t need to increase humidity for the entire room or home. As long as the air in the plant’s immediate surroundings is moist enough, that’s sufficient.

Of course, you can just move the plant to the bathroom or kitchen which are the most humid locations in the home.

Allow the top 25% of soil to dry between waterings. And always check the soil before adding water.

The plant enjoy soil that is consistently moist. That’s because it often grows along riverbeds in its natural habitat. Therefore, the surrounding soil is kept somewhat damp.

However, you can’t exactly do the same when the plant is grown in a pot.

That’s because unlike in the ground, the moisture has nowhere else to disperse to when kept in a container. So damp soil stays wet which causes overwatering and potentially root rot.

As such, in addition to keeping the soil moist, it is a good idea to allow the soil dry at least partially before you add more water.

This way, you avoid having to deal with excess moisture and root rot.

This is especially true during the colder months since there is less sun and the temperature is lower. Thus, less evaporation happens.

Similarly, the cold weather causes the plant’s growth to slow. Therefore, it will not consume as much water is it does during the warmer months.

So, what you’re left with is wet soil, which is very risky.

On the other hand, avoid letting the soil completely go dry as well.

The reason why good drainage is essential is again to avoid overwatering and waterlogging. And the right soil allows to avoid the risk of root rot.

On the other hand, avoid heavy soils or those that hold a lot of water. These will give the plant’s roots problems by leaving them wet.

Similarly, stay away from sandy soils or those that drain water too quickly. These will dry out the roots before they can get hydrated.

To get that balance and achieve well-draining soil that the Alocasia Dark Star will enjoys, combine the following ingredients.

Mix them in a bowl thoroughly, then fill a container with it.

You can add orchid bark and charcoal as well if you want to increase drainage and aeriation as well.

The Alocasia Dark Star needs fertilizer to grow tall and produce its impressively large foliage. As such, it is a good idea to feed the plant to make sure that it gets the nutrients it needs for optimal development.

You can use a balanced water-soluble fertilizer with a 15-15-15 N-P-K formulation. Dilute this by 50% the suggested strength in the label each time you apply.

Indoor container plants don’t need as much plant food as they do when grown in the ground outdoors.

Also, feed the plant only when it is actively growing. This occurs during spring and summer. You don’t need to fertilize it during fall and winter.

It is very important not to over fertilize the plant because doing so can lead to damaging the roots.

That’s because commercial fertilizers contain salts. So, the more you feed the plant, the more salts are left in the soil in addition to giving the plant nutrients.

When these salts build up to a point, it becomes toxic and damaging to the roots.

As such, it is a good idea to flush the soil every few months to get rid of any excess salts or minerals that are left there.

The Alocasia Dark Star will grow to about 6 feet tall and 5 feet wide indoors. Outdoors it will get much taller easily reaching 8 to 15 feet if properly cared for.

Also the leaves will become amazingly huge if kept outdoors even in a pot. The biggest one I’ve seen had leaves that easily covered by entire body from head to toe in length. Of course, they were very wide as well.

As such, pruning will moistly be able size and space indoors. The Dark Star Alocasia’s leaves will speat up and out. And as they get bigger they will cover more area. If you have space for this, I encourage you to just let it grow as they look stunning.

If not, you’ll need to prune to limit its size.

In addition to pruning is leaves to limit size, you can also prune its roots to do so.

By pruning its roots, you can pot the plant back to the same container instead of having to repot to a larger one. It also keeps the plant’s overall size from getting much bigger since you’re limiting its roots.

How to Propagate Alocasia Dark Star

In doing so, you’ll also be reducing the size of the mother plant.

This makes division another method you can use to limit the size of the plant. And you get new plants along the way as well.

Of course, you can divide so that the new plants are more or less the same size. Or if you want to keep majority of the mother plant’s size, just take a chunk out and divide a smaller plant.

It is really up to you.

The best time to propagate the plant is during spring to early summer.

Here’s how to propagate the Alocasia Dark Star by division.

As a side note, you may find some offsets growing once you check the roots.

You can take the bigger offsets and plant them into a pot of their own. These will eventually grow into clones of the parent since offsets are pretty much baby versions of the plant itself.

Also, since the divisions you made already have roots, you don’t need to wait for them to root as you do cuttings. They will also have leaves which means it can just continue growing from here on.

How to Repot or Transplant Alocasia Dark Star

The Alocasia Dark Star needs repotting once it outgrows its container. You’ll know this as it becomes root bound and you’ll see roots coming out from the bottom of the pot’s drainage holes.

The best time to repot the plant is spring.

Outside of being root bound, you don’t really want to move the plant unless it has a problem or there is an emergency.

Here’s how to repot the Alocasia Dark Star.

Yes, the Alocasia Dark Star is toxic but only when ingested. It is poisonous to people, dogs and cats because it contains insoluble calcium oxalate crystals.

These will cause pain, swelling and irritation in the lips and oral cavity. It can also lead to vomiting, difficulty breathing and excessive drooling.

The Alocasia Dark Star can experience some unwanted visitors along the way. Although, you may never have to deal with any pests while you own the plant as well.

The best way to prevent pests is to give the plant proper care. It becomes susceptible when weak, sick or stressed.

Also cleaning its leaves will help keep the pests away since these bugs like dust.

However, there is no way to guarantee that insects never attack your plant.

Therefore, regular inspection is still a must. The most common pests for this plant are mealybugs and spider mites.

Both of these will suck on the sap of the plant which robs it of moisture and nutrients. As such, you don’t want the pests to turn into an infestation. Otherwise, they will cause serious damage.

Root rot and leaf infections are the more common diseases to look out for.

Root rot affects the root system and can prevent them from functioning. Thus, it is important to avoid this at all costs. If it happens, it is crucial to spot it early and repot the plant.

To prevent root rot, avoid overwatering. Also use well-draining soil to reduce the risk of waterlogging. And don’t forget to use a pot with holes for drainage.

Leaf infections can be bacterial or fungal.

Both are caused by excess moisture on leaves that does not dry soon enough. Therefore, wetting the leaves is the main culprit. Usually lack of light and air circulation is why the moisture does not dry.

Although it can also happen if you water the plant late in the day when it gets cooler and there is less light.